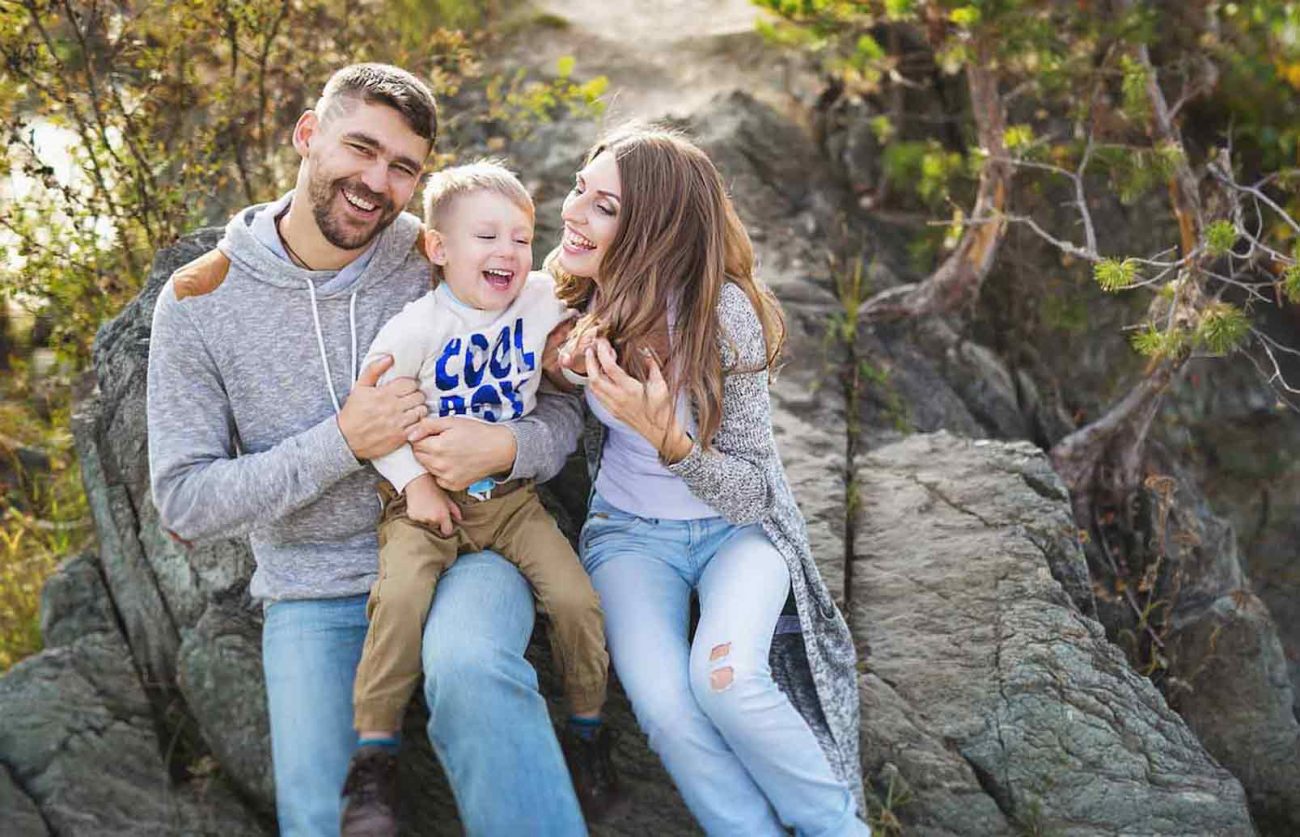 In Part 1 of our simple, funny love story, I wrote about how my husband and I met, fell in love, and got engaged. Here is Part 2…

Our wedding day was pretty spectacular. I remember my wedding planner telling me to take mental pictures throughout the day, and I did just that. If I close my eyes, I can still recall the sunrise from the hotel balcony, my mom’s face when we thought we didn’t have the ribbon to lace the back of my dress, my dad’s face when he first saw me in my dress, my cousins trying to hold up my dress so I could pee one last time before the ceremony, wiping sweat from David’s brow as he read his vows, my mom’s signature dance move called “genie coming out of the bottle” … the list goes on.

But one of the most memorable moments from our wedding took place during the communion portion of our ceremony, but probably not for the reasons you might expect. We partook in communion … but wait, what is that? Is that a curly, little hair at the bottom of the communion cup? I grab David’s arm. “David, I’m going to gag … you drink it first.” And he did. First lesson of marriage, conquered: know when to take one for the team.

But that’s not where our communion story ends, though I wish badly that it did. We conquered the hair-laced grape juice and were now on to pray … pray for our marriage and pray out of a grateful heart that we survived without drinking down the hair or getting the hair stuck between our teeth. But, the song that was playing during this portion of the ceremony seemed to be the song that never ended. So, we said “Amen” and started whispering sweet nothings into each other’s ears, and by “sweet nothings” I mean we talked dirty to each other (forgive me, we were nearly newlyweds).

And then we remembered … David had a mic attached to his jacket. But, good news: the mic to the audience was not on. Phew! Bad news: our videographer had also put a mic on David. While the audience may not have heard our raunchy whispers, chances are the videographer later got an earful while editing our wedding video. Second lesson of marriage, failed: know when to turn up the heat, and turn off the mic.

We have learned many more lessons since our wedding day, and many more mental pictures have been taken. Although I haven’t kept every single one of my wedding vows, I am thankful for a husband who is willing to forgive when I ask for grace. I’m grateful that we are on this path together for the long haul, learning together and laughing along the way.

Boy and Girl Get a Mortgage.

Our first years of marriage were really about defining who we were not only as a couple, but as a team. Over time, we fell into our roles.

I cooked; he did the dishes. He provided gross clothes from his construction job; I did the laundry (that is, until I turned too many whites into pinks and too many shirts into crop-tops … but those are “in” now, right?). I was busy trying to add a three-legged shelter dog to our family; David was busy trying to keep me from “just looking.” (I won. We got a four-legged chocolate lab, named Riley.)

We began our hobbies.

A hobby is defined by Merriam-Webster as “the pursuit outside one’s regular occupation engaged in especially for relaxation” (for all of those parents out there who have forgotten what this means). David is a glutton for hobbies, and our garage is a shrine to hobbies past and present. His hobbies have included: training and traveling for races, road biking, fishing, golfing (for the record, he once classified it as a “non-sport”), smoking meats, and the newest hobby, and worst mistake of a birthday gift, beer brewing. I’ve never seen Breaking Bad, but I’m assuming brewing or bottling day in the Gordon kitchen closely resembles it.

We established our home.

After a quick six months of renting, we found a major fixer upper, and not one where we could just uncover some Joanna Gaines’ shiplap and call it a day. It was a foreclosure where the previous tenants and owners stole everything, from the cabinets to the backsplash. But they left us with lovely, nondescript stains, holes in the walls that had to be checked for drugs, some mysterious boxes supposedly buried in the backyard, and a major case of the heebie-jeebies. There were rumors and soap-opera like stories that surrounded our home that we only heard about after we moved in. After three months of using a microwave, cooler, and an easy-bake oven as a kitchen (okay, I may have exaggerated with that one), patching up holes, painting over the mac ‘n’ cheese colored walls, and lots of support and suggestions of home exorcisms, we had created our home base.

Finally, we defined what it meant to be a “Gordon.”

Apparently “Gordon” has already been defined as “spacious fort” as a Scottish surname, and also “dull and stupid” as a French surname. Thankfully, we are the Scottish kind. If I were responsible for defining “Gordon” it would be: (noun) a person who is a member of a family unit that dwells in a messy refuge most likely covered in seven layers of applesauce and dog saliva; (verb) managing the crazy and doing it with a heavy dose of grace and sarcasm.

But what it really means in our household to be a Gordon is to be a part of a team that cheers on one another, shares in the joys, takes on the trials, and hopes that in doing so we are testaments of grit and grace.

Boy and Girl Get a Minivan.

I started writing early this portion about the highs and lows of parenting, how I was going to be the mom of schedules, no iPads, balanced diets, and manners. I had some cute stories about our conversation to start a family that took place exactly a year before our first was born, pregnancy pains, my daughter’s diaper blowouts, my son’s nail polish portrait on the new coffee table, feeding his fishy cake and ice cream, his obsession with weird toy reviews on KidsTube, blah blah blah. I wasn’t very pleased with what I wrote and actually thought “thankfully this is all I have and my kids haven’t given me any more material to write about.”

And then … this happened.

This. Day. Was. Rough. My firstborn, by the grace of God, is genuinely sweet and sensitive (nearly to a fault). I remember filling out pre-school forms and wondering why they barely gave me any space to fill out all the remarkable qualities about my child. But this taught me that humble pie isn’t very yummy. It’s still too fresh and not yet funny (not sure if it ever will be) to share in full detail.

I should’ve known we wouldn’t be parent rock stars once the never-used, wedding present dry bar finally found its true calling as a diaper changing table. I shake my head at how little we actually know about raising our precious kids, our legacy, our arrows to send off into the world. Parenthood has meant days of blood, sweat, or tears. Just some days, like today, all three happen at once. (If I’m honest, I feel like “poop” should be added to that trio.)

It was really, truly the first day I thought “I’ve failed at this.” My son behaved so badly he even put himself in time-out when we got home. I left him there so long that he fell asleep (mainly because I didn’t know what to say to him and also because I was cleaning up a gold-metal worthy baby blow out.) As I went to get him for another talk, he fell off the chair and hit his head. Fail. Have you ever tried to discipline your child and have it go totally awry? Yea…

I was at an all-time high of frustration, and while putting the dishes away, I dropped a bowl on the counter, shattering it all over the kitchen and sending a long shard right into my forearm that had to be dug out while holding back my gag reflex. My reaction: “I’m done!” My son’s response: “Done with me, mommy?” Immediate guilt and shame. Right to the hormones. Lots of tears from both of us. After watching my son run to the bathroom to get me Nemo band-aids, I was struck with how much grace I need and how much I need to give my kids.

That day, Team Gordon was struggling … like that male gymnast who was doing the horizontal bar during the Olympics … flipping and twirling, probably with too much on his mind right as he lost grip of the bar and landed straight on his face and just laid there sprawled out, completely stunned. He practiced so hard and probably felt like he had it all together when all of the sudden the floor met his face. I feel his pain.

But, that’s life. That’s our life. Sometimes we lose our grip and the floor hits us by surprise, making David and I even more aware of our need for each other, for a little humor and humility, for our support systems, for time to intentionally pour into our family, and for our daily, hourly, minute-by-minute reliance upon grace.

So, there it is. My life now feels like one of those reality shows that people watch as a guilty pleasure to make their own lives seem more normal. Somehow we went from adventurous lovebirds to working parents of two. Now, my sporty SUV has been traded in for a minivan, and David’s fishing hobby only comes in handy when fishing Goldfish out of the couch cushions. Life sure has changed, but life is sweet, even sweeter than the syrup covered, chocolate chip pancakes from our first Waffle House “outing.”

If you missed Part 1, click here to catch up.

—
You’ll also like One Thing That Will Improve After Your First Year of Marriage, This Old Couch: How Our Sofas Tell Our Marriage Story, The Wedding Day: One Year Reflections, and Our Marriage Motto
#gritandgracelife

Carolyn still wants to be a dolphin trainer when she grows up, lip-synced her way through most of high school choir, hates following recipes, and thinks her spirit animal is Lucille Ball or Amelia Bedelia.

Mom, You Know When Your Kid Needs a Win

If Your Man Didn’t Propose (But Should Have) Read This