Last month, I checked off an impossible adventure on my lifetime bucket list: seeing the Northern Lights. It was absolutely more wondrous than I imagined and not at all what I expected—kind of like faith.

I had traveled 3150 miles to meet ten friends for a hiking adventure in Iceland. We had planned the trip for the summer of 2020 before we knew the world would close to tourism. It was already an epic feat to get ten women with busy lives and families to align calendars but then, we had to rework it all over again for the summer of 2022. As we set off from six separate cities to meet in Reykjavik, some of us couldn’t even remember why we had chosen our destination.

“Remind me why are we going to Iceland?” my friend, Carrie, asked me on the phone as we were discussing the very long packing list. In truth, I wasn’t sure either except there would be waterfalls and glaciers. 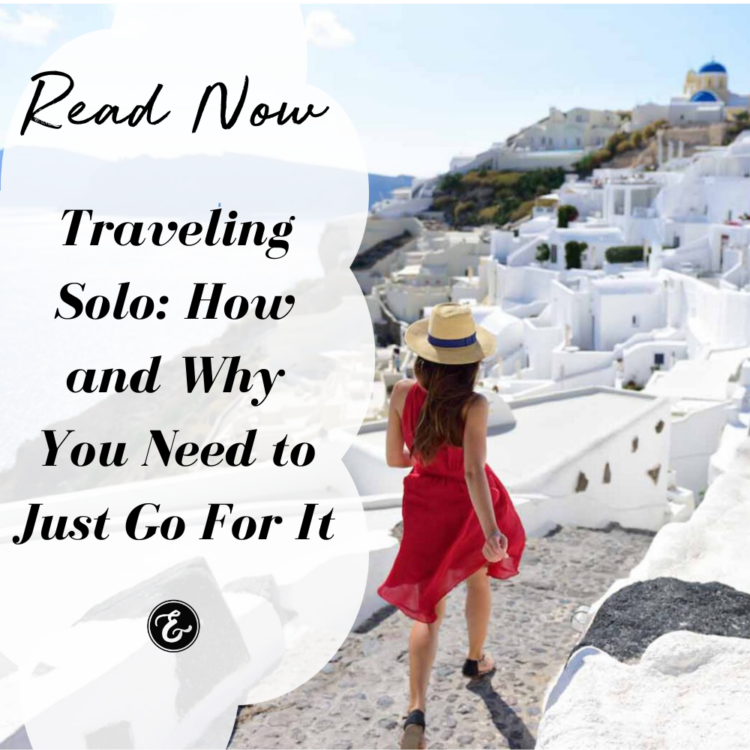 We had booked through a tour company that specialized in adventure travel. Our ten-page pre-departure packet included three pages of what not to forget. Due to the recent worldwide lost luggage warnings, I was committed to packing only one carryon bag. In addition, the weather forecast told me to expect low temperatures with 100% chance of rain. Fitting my hiking boots, rain pants, rain jacket, fleece, and sweaters all in a suitcase that could fit in the overhead compartment was a challenge, but I did it. Boarding the plane, I was already feeling a small sense of accomplishment.

Over the next seven days, the land of fire and ice did not disappoint. I would witness whales playing in the ocean, trek across both melting glaciers and ancient lava fields, and stand under thundering waterfalls. The natural beauty of Iceland is astounding with a new waterfall around every corner and moss-covered mountains spilling into impossibly blue rivers. Each night we went to sleep with dozens of photos from our day and tens of thousands of steps taken to see it all. We were always hoping, however, our day might end with the legendary green glow of the Northern Lights.

My whole life, I had always been amazed by the photos of what is also called the aurora borealis. There was something about the dancing neon lightshow in the sky that had always captivated my imagination. Somehow, I thought it only happened in the Artic Circle in the winter months, so I did not really think I might see them on a summer trip. When our tour leaders, Jon and Solvi, mentioned that it might be possible, I could not believe our luck. Not only were we going to see an active volcano that had just begun erupting in Iceland, but we might also catch the Northern Lights!

Jon explained, however, that in order to see the famous natural light show, a lot of factors had to align. First, there had to be a very specific type of solar storm on the sun that would release charged particles. Then, those particles would travel through space before interacting with the Earth’s magnetic field which transforms them into a type of visible kinetic energy. Next, to be visible, there has to be a clear night with no cloud cover and no full moon. And finally, you have to be awake in a place with little manmade light which would obscure the fickle Northern Lights. In short, the stars pretty much have to align if you were ever going to see the Aurora Borealis.

We had many evenings full of rain and clouds, so it wasn’t even a possibility until we checked into our last hotel for the final three nights of the trip. Our lodge was in a very rural area so we knew the nighttime sky would not be competing with any city lights. It was a place so well-known for sightings that they actually had a button on the phone in our room that said, “Aurora Wakeup.” By pushing it, you alerted the staff that if they saw the Northern Lights during the night, you wanted to be awakened. My roommate for the trip was my sister-in-law, Nancy, and we excitedly signed ourselves up.

We Waited with Great Anticipation

The first night was rated a “6 out of 10” and a “very good chance” so we went to bed expecting a call. I tossed and turned trying to fall asleep but really, I was trying to stay awake. I just knew any minute that the phone would ring, so I had my shoes and jacket ready at the foot of my twin bed. When I finally woke up, it was morning which meant no call had come. It was like Christmas morning and Santa forgot to show.

The second night after a great day of trekking to see seven waterfalls and two hot spring geysers, we could not really be disappointed that continued clouds and rain had made a Northern Lights sighting impossible.

After dinner on our last night, I wandered outside to take a photo of the golden sunset. The front desk clerk was also outside taking in the beauty of the ending day.

“It looks good for tonight,” he told me.

I texted our whole group and reminded them to press the Aurora Wakeup button. Nancy and I prepared our clothes and went to bed expectant. Sure enough, at 11:30 p.m. the call came. We threw on our jackets over pajamas and rushed outside. I was surprised not every hotel guest had asked for the wakeup call and was running outside—who wouldn’t want to see the Northern lights? Our whole group, however, was awake in the parking lot with Jon and Solvi staring up at the dark night. The sky appeared to be turning from gray to black with white wispy streaks filled the sky.

I was confused. Where was the neon green? Where were the bright colors I had seen in so many photos?

“You must use your camera!” Jon reminded us.

Earlier in the week, Jon had tried to explain the phenomenon of our eyes seeing with “rods and cones” and therefore the colors were difficult to catch with the naked eye. Honestly, when he had explained it, on a long van ride, I thought we had a language barrier. While his English was good, his native Icelandic accent made some of Jon’s descriptions sound a little lost in translation. He had tried to tell us that the Northern Lights would appear white, but I could not imagine that all the photos I had seen of incredible blues, greens, pinks and purples were not just spread across the heavens for all to clearly see.

Now, however, I was looking at the night sky where some people were very excitedly pointing, and all I saw was a gray and white sky. Looking around, I could see others with cell phones and cameras held above their heads.

Next to me, Carrie, showed me a photo she had just taken and said, “Wow! Look at that!”

Sure enough, on her phone screen was an incredibly blue green swirl apparently right above our heads.

I held up my own phone and through the  rectangular screen, I witnessed the same luminous, magnificent explosion of color. Over the next ten minutes, we took dozens of photos holding phones over our heads to enhance the light and capture what could not been seen without the magic of a proper lens. As people shivered in their bathrobes, they eventually returned to their rooms. Nancy and I stayed outside with our guides, turning every which way to capture all the dancing light above our heads.

“It’s remarkable really,” Jon told us. “I checked the weather and all over Iceland there is cloud cover tonight, except for this one patch above us.” He shook his head in wonder as he told us. “We are very lucky.”

I felt impossibly lucky that all the stars had aligned to see this heavenly sight. Over the next hour and half,  Nancy and I kept 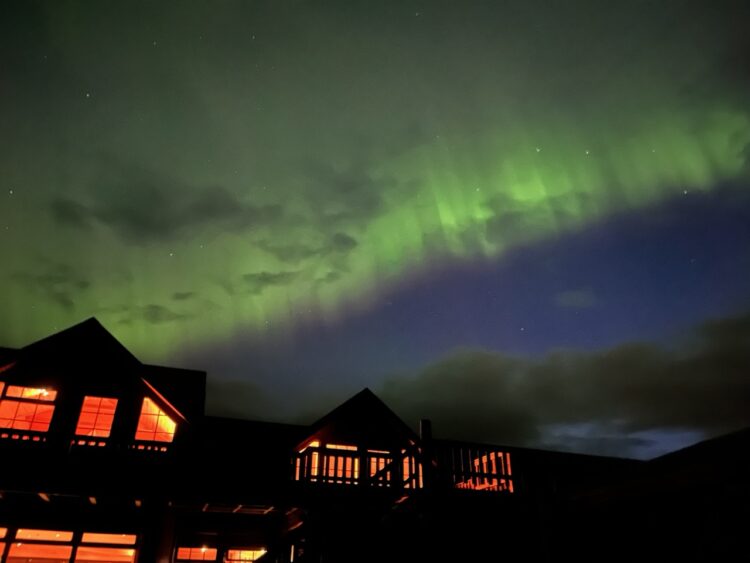 going on our porch to see more magic in the sky. Somewhere across the river, a party was happening and the lyrics of Joe Cocker’s “You Are So Beautiful” floated to us like the perfect soundtrack to the night.

Through our phones and above our heads, the lights were ever-changing from lime green bands to ribbons of emerald and turquoise. It was astounding to look at the night with my eyes to see only black and white, yet with a lens, the same sky was a riot of color.

Unless someone, like our guide, Jon, had let us in on the secret to view through a camera, we would have missed it all. We needed both the wakeup call and the secret to witness all the wonder.

Faith Requires You to Look Up and Wake Up

I think faith is a lot like that. You can go through life seeing everything as it is only in grayscale, just going through the motions and keeping your head down. It takes something or someone, to open your eyes to a new way of looking at all that is around us just waiting to be seen. Just like seeing the Northern Lights, it takes the right set of circumstances to truly find faith. Not only does everything have to align, you also have to be awake and ready. You have to be willing to see. You have to choose to press the Aurora Wakeup button. Otherwise, you sleep through your whole life and miss it.

The same night we saw the Northern Lights in Iceland, I read the amazing geomagnetic storms were also visible in Oregon, Iowa and Pennsylvania. It turns out, I didn’t have to travel three thousand miles from home to see them. The same wondrous event was seen much closer to home.

But I know now that even if I had happened to be standing under clear skies in Oregon, I would have missed the Northern Lights on that same night. While I might have gotten out of bed to look up, I would have gone back to sleep disappointed thinking all I saw were white streaks on a gray sky. I would not have known to hold up my camera and see the sky through a different lens. It took traveling to Iceland to know how to do that and now, I will never witness the night sky or faith the same way ever again.

I have received both the wakeup call and the secret to seeing so that now, I can always be awake, looking for the luminous all around us.

—
How does faith fit into our grit and grace life? Listen to this episode to find out: Grit and Grace, but What About God? – 105

Kathy Izard is an award-winning author and speaker who helped bring transformation to Charlotte, NC in homelessness, housing and mental health. After a twenty-year career in advertising, Kathy made an unexpected mid-life change to begin housing those experiencing homelessness. Since 2008, she has helped lead community efforts to raise over $75 million to build housing including Moore Place, and a mental health treatment center, HopeWay. Through writing, speaking and coaching, Kathy draws upon her own path to purpose to help others find what is calling them. As an author, Kathy writes inspirational nonfiction for adults including, The Hundred Story Home which received a 2017 Christopher Award and a new release, The Last Ordinary Hour: Living Life Now That Nothing Will Ever Be the Same. Her illustrated children’s book A Good Night for Mr. Coleman helps kids understand the complex issue of homelessness and the idea that one person can make a difference. Kathy’s work has been featured on the Today Show and NPR inspiring people to be changemakers in their communities. Learn more www.kathyizard.com