Advertise With Us
Home / Faith  / Our Story: From Pregnant Widow to Family of Four

Our Story: From Pregnant Widow to Family of Four 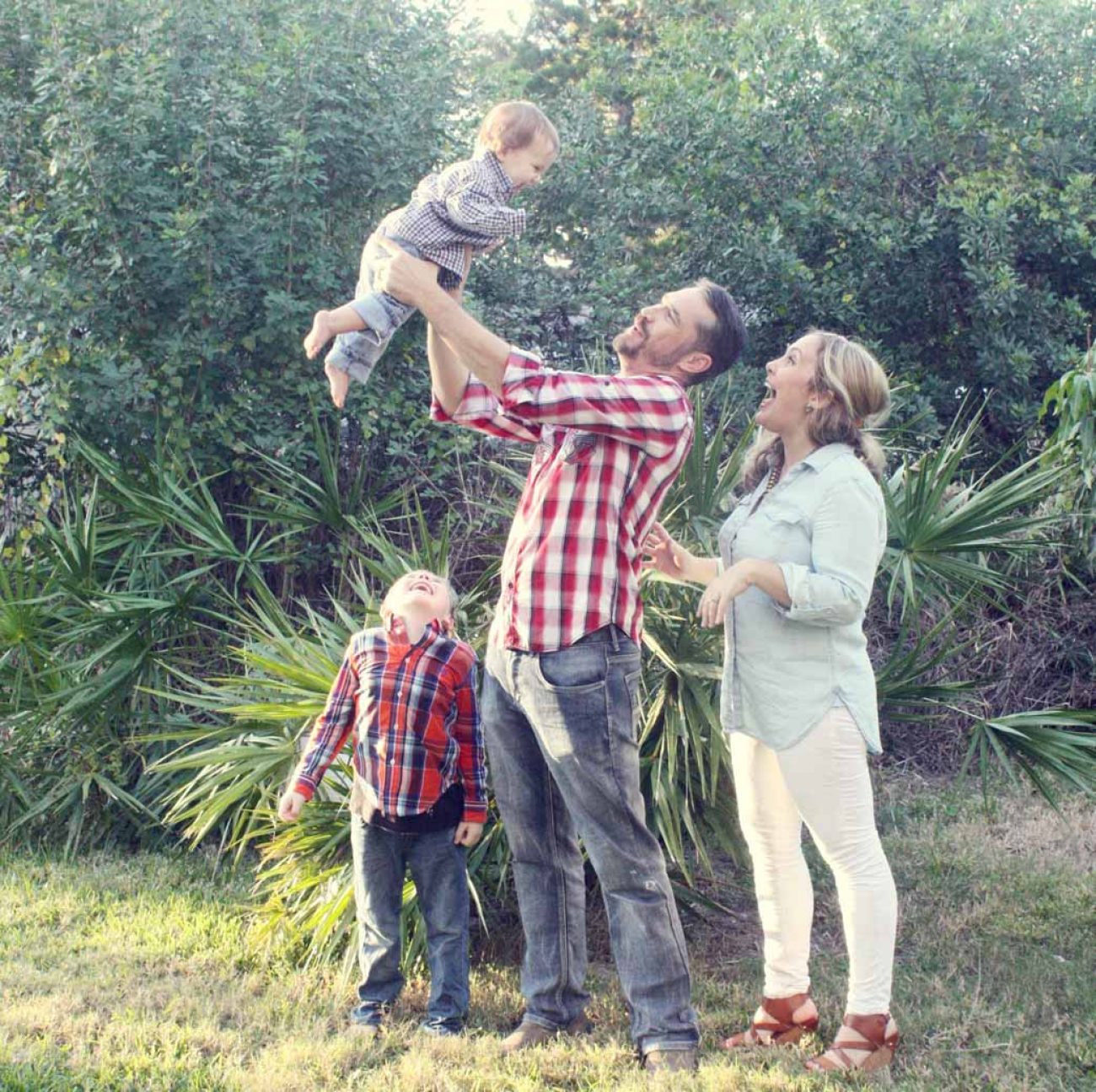 This is Part 3 of Ashby’s story. Be sure to catch up if you missed Part 1 or Part 2.

I used to have a florally framed paper titled “Our Family Purpose” on my fridge. At the top of the paper was written “Jesus, Ashby and Trooper” and below was a list of things I wanted our lives to be about: loving and serving others, pursuing Biblical truth, being generous, etc. In my mind, this was our family and I had no desire for it to grow. I felt like I had won the lottery with my late husband, Spencer, and I knew I would see him again in heaven. So in the meantime I was focusing on my son, Trooper, and whatever ministry opportunities crossed my path.

One such opportunity presented itself, so Trooper and I took a mission trip to El Salvador. We were two of the first Caucasians to ever venture into this village and I thought maybe it would be our future home. In true Elisabeth Elliott style, I envisioned us going to an unreached area, teaching English classes, and loving on the local children. However, while we were there, I wrestled with the feeling that this was not supposed to be long term. The Lord was putting on my heart that I needed physical protection and the covering of a husband. This was not something I wanted to hear, so I dismissed it to some extent but did decide to fly home.

Within a few months the topic was brought up again, but this time by an unlikely source: my two-year-old son. While driving, his cute little voice in the backseat floated up to my ears and said, “Mommy I want to pray for my daddy.” I told him that was sweet but since his daddy was with Jesus, he didn’t really need prayer. He said, “No mommy. Not my daddy in heaven, my daddy on earth. Let’s pray for him.” I was utterly speechless. My mind began wandering to who might have put him up to this—but then I felt the strong conviction of the Holy Spirit to pray. With words that did not feel like my own, I petitioned the Lord for my son’s daddy on earth.

This opened up a tidal wave of prayers from Trooper. He prayed any time and anywhere he had a chance for his daddy on earth. At first it was really sweet and would often illicit tears from the eyes of those we were praying with over dinner. Sometimes I wanted to crawl under a table depending on the crowd, especially if it was in front of people I didn’t know. But those prayers slowly began to change my heart and I began to pray on my own. I prayed for a husband who loved Jesus but had some edge to him. I prayed for someone who would love Trooper as his own. I prayed I wouldn’t have to date but that when I met him, I would know quickly. Several more months went by.

With words that did not feel like my own, I petitioned the Lord for my son’s daddy on earth.

Upon the return of a short trip to Haiti, some friends of mine asked Trooper and I over for dinner. They were actively involved in the mission organization I had just visited, so I assumed the dinner was to ask me about the trip. When I walked in, their new home was simply stunning and I said as much. They told me they had an amazing carpenter named Dominic who was responsible for the beautiful work and as they were giving me the tour, he “happened” to be in one of the rooms hanging a picture. It seemed totally normal that he would be there, but later, when he came out on the lanai for dinner dressed differently in a long-sleeved collared shirt and button-up vest, I started to feel like I was the star of my own romantic comedy. This smelled strongly of a set-up.

He took his place next to me when Trooper, under no uncertain terms, let Dominic know that he had taken his seat. Dom took it in stride and hopped up with a grin while I quickly drained my wine glass. Over the course of the night we discovered we had many friends in common, I knew and loved the church he went to, and we were both avid scuba divers. I drove away dumb-founded.

Not long after, our friends invited me again for dinner, but this time under the pretense that Dominic would be there. The night of, I almost chickened out but Spencer’s sister Kim—of all people—told me to “drink a cup of coffee, put on a cute outfit and get over there.” A couple who mean the world to me accompanied me as backup. As the women sat and talked at the table and the men and Trooper were out on the lanai grilling, I got up to use the restroom. Out of the corner of my eye I saw Dominic on the floor playing with Trooper. He wasn’t doing it in my line of eyesight and I saw that his interest was genuine. Trooper was delighted and I think my heart actually skipped a beat.

Before dinner, Trooper asked if he could pray. Panic immediately set in and I urgently began praying “please no please no please no” as he uttered the words, “Dear Jesus please bring me a daddy on earth.” My hands were clammy and I’m sure my face was bright red, but as I opened my eyes, Dominic met my gaze and smiled. He immediately put me at ease and over the course of the night, I was drawn to him even more.

Trooper was delighted and I think my heart actually skipped a beat.

The next week he called and asked if he could take Trooper and me miniature golfing. I was both terrified and excited (but mainly terrified). We had a great time and I made dinner afterward. We ended up talking on the porch for the next five hours. He shared with me that like Trooper, his dad had died young. Dominic was only two years old when his father was killed by a drunk driver. His mom remarried a wonderful man who would become his “daddy on earth.” This man had so impacted him that when Dom started praying for a wife, he also prayed that she would have a child so that he could be to that child what his stepdad was to him.

As he left that night, I realized he already understood Trooper in a way no one else could. Again, I was utterly speechless. I couldn’t believe this was happening and couldn’t sleep all night due to happiness and also shock. We both knew very quickly that this was headed for marriage and I praised God for how He answered my prayers. This tough (yet tender), tattooed man loves Jesus with all his heart but has a definite edge. I didn’t have to date around to meet him and his bond with Trooper was immediate. The specificity of these answers astounded me. Actually, they still astound me and taught me the importance of being detailed and specific with your prayers.

One year later, we got married on Marco Island on a cliff overlooking the water. Two hundred of our family and friends looked on with eyes full of tears and hearts full of love as we shared the vows we wrote for each other. Trooper stood proudly next to Dominic in their matching shirts and vests as our ring “bear” (when we told him he was the ring bearer he immediately dug out a bear hat from his winter clothes and looked way too cute for me to correct him). He wore his daddy in heaven’s (Spencer’s) bow tie and Spencer’s nieces stood next to me as flower girls.

Not long after we were married Trooper started praying for a baby. One year later we had our son Boaz Xander Duval. He was the beautiful little string Jesus gave us to tie our family even closer together.

The specificity of these answers astounded me.

One of my favorite things about Dominic is his encouragement for us to talk about Spencer. He asks questions about him, talks with Trooper openly about him, and tells me how important it is for me to keep things of his for Trooper as he gets older. This was something I never thought to pray for, but God lavishly and lovingly gives what we need (even when we don’t know to ask) and He knew we needed Dom. A few months ago Trooper stomped in the living room declaring loudly what a great family we have: “Our family is Jesus, Mommy, Daddy, Spencer, me, and Boaz!”

There isn’t a day that goes by that I’m not thankful for the names added to the paper on my fridge. On my husband’s Facebook page there is a banner at the top that says, “Those who leave everything in God’s hands will eventually see God’s hand in everything!” I love that. It is so beautifully reminiscent of Romans 8:28 “And we know that God causes everything to work together for the good of those who love God and are called according to his purpose for them.”

No matter what we face on this earth, we can know He is good. He loves us. And if we will let Him, He will pen the words of our story in a way that will bring us joy and Him glory.

Be sure to read Part 1 and Part 2 of Ashby’s story if you haven’t already! You’ll also love another recent piece of hers, A Really Different Kind of Family

—
You’ll also like How My Husband and I Survived My Affair,  Building Faith: Growing in Your Relationship with God, For The Fatherless, and The Great Defender
#gritandgracelife