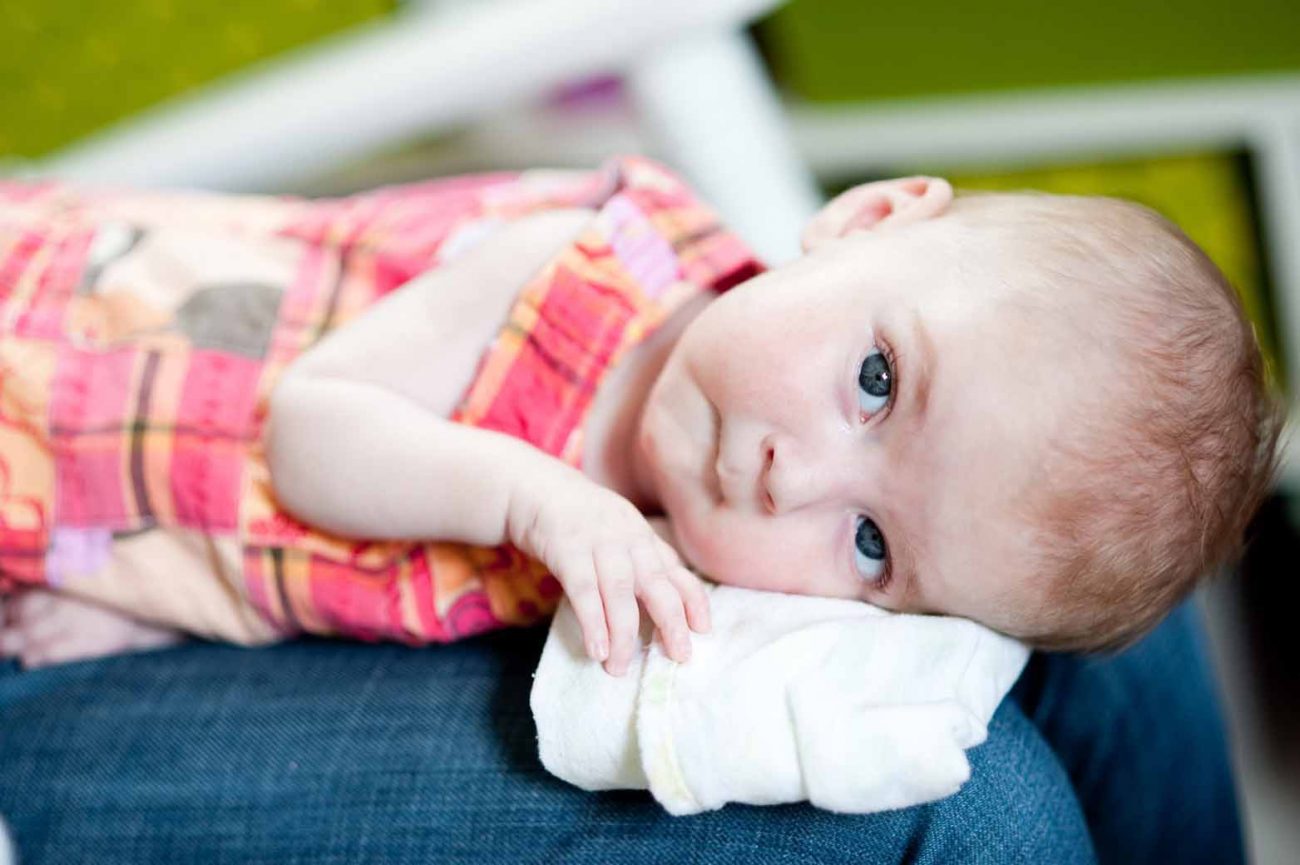 This is part two of a four part series of a young mother’s story. We were so captivated by her journey we knew you would be too. Find part 1 here.

As I left the doctor’s office, my heart sank. I knew the specialist discovered something terrible and wouldn’t tell me. Thirty minutes after walking out of his office, the phone rang. It was our pediatrician. I was sure the specialist called him as soon as I left, and now he was calling me to confirm my fears. The first words I heard were, “Ashley, it’s not good.” With our daughter being a month and a half old, and seemingly mentally alert, in my head, the worst case scenario was a lifetime of physical therapy, surgeries, and/or physical disability. When I pushed our pediatrician for answers, he kept saying it wasn’t good and we would wait to see what the neurologist had to say. That appointment was two weeks away and having to be in the dark for that long seemed like torture. After pleading with him for answers, he finally he let me know the specialist thought Skylar had one of five conditions—all of which were a bunch of letter combinations that I had never heard of. Our pediatrician said, “If you make the really bad decision to google these, here’s my cell phone number. You can call anytime.”

I knew it was much worse than I thought. Doctors don’t give out their cell phone numbers, and they certainly don’t tell you to call any time. As panic shot through my veins, I begged for him to tell me what our worst case scenario would be; he hesitated and said it would likely be premature expiration. “What?” I exclaimed, “as in death?!” I don’t even remember what came next—something about waiting for the neurologist to confirm. Shock covered me like a blanket. How could my baby die? She was so full of life, and as I looked into her deep blue eyes, my heart ached at the possibility of losing her. It just couldn’t be possible.

I knew it was much worse than I thought. Doctors don’t give out their cell phone numbers, and they certainly don’t tell you to call any time.

I did what any normal mother would do… I drove home as fast as I could and googled the list the pediatrician gave me through the tears (I had a flip phone at the time so Siri couldn’t help me research). Every condition I learned about was horrifying. Sure enough, Skylar had every symptom of SMA type 1, which we learned stood for Spinal Muscular Atrophy. It’s a condition very similar to ALS but in babies, for which there is no cure.

Most type 1 babies don’t see their first birthday. We were approaching month two of her life. How could this be happening? We learned SMA is genetic and my husband and I are both carriers. In fact, 1 in 40 people are carries—most don’t have a clue. The next two weeks were painful—my world collapsed in one phone call and I was left to sort through it. Why do babies die? Why does my baby have to die? Do I really believe in heaven? In Jesus? What the hell is happening to my life?

It felt like everything was changing, spiraling out of control, and I was helpless.

After the shockwave passed, and we received the dreaded confirmed diagnosis of SMA from our neurologist, I moved into full-blown mama bear mode to fight for her life. We started working with doctors in order to start a care plan and began learning as much as we could about the journey SMA would take us through. Knowing my daughter was going to meet death much too soon, it forced me to really come to terms with what happens after death. Where would she go? Would I ever see her again? Is God and Jesus and the Holy Spirit really who they say they are? Can I believe it? I chose to go all in—no matter what.

We Learned to Fight for Our Daughter

A month later we faced our first, real wake-up call. Skylar was losing her ability to swallow and was choking during each feeding. Because SMA is rare (1 in 6,000 babies are born with it each year), there aren’t many doctors who are specialized in proper care. We quickly learned to be her advocate, with the help of other SMA parents, because the protocol for a normal, healthy baby could be fatal for an SMA baby. She needed surgery for a feeding tube, and came out of it with flying colors. It was a small victory in what could’ve easily been a loss. Due to our daughter’s compromised immune system, we became homebodies and tried to enjoy life as best we could together as our next battle was Skylar’s breathing. She had already lost almost all motion of her limbs and struggled for air at night and during naps.

At 10 months old, we called in hospice because our pulmonologist (breathing/lung doctor) told us we didn’t have any other options. When we called an SMA researcher in Utah, she was furious and told us to increase her BiPap machine settings to give her more support. That one phone call doubled my daughter’s life. Instead of saying goodbye at 10 months old, we were able to cherish an extra full year with her! Needless to say, we found a new pulmonologist to care for Skylar and I am eternally grateful for Dr. Swoboda’s guidance to get more time with our sweet girl.

Our days were full of loving the time we had with each other and cherishing every moment, not knowing when a day would be our last. Some days were rough. There were days she turned blue and I would have to use a cough assist machine and a suction machine in order to clear her airway and bring her back to pink. There were days my husband and I were incapable of loving each other because the stress and heartbreak were too much. There were days that I didn’t want to get out of bed because of what I knew I could face that day… But there were also days when I felt God so close I could almost touch Him. I was continually reminded that life is ever-changing, yet God is always there, in control and ready to provide what you need when you need it.

During Skylar’s life, we prayed for healing, we begged God for mercy, and we asked that our circumstances would be used to glorify Him in whatever way they could. I believe all of our prayers were answered. Skylar died at 21-months-old, held in our arms, as her body failed to sustain her breath. My husband ran out of the house and I was left in the room by myself. Without life in her body, I felt so alone and abandoned until moments later, an unexplainable peace filled the room, almost as if someone had their hand on my shoulder standing next to me that I can only explain as Jesus. Even though we didn’t get a miracle healing on earth, I do believe Skylar is fully healed now on the other side of her last breath.

Because my daughter’s organs were completely useless, we asked the researcher in Utah if she could use anything from her body to help further her studies. The next day we went to a place called Ramsey Creek Preserve in South Carolina to bury Skylar. We wanted a natural burial, where it feels like you’re on a hike in the woods instead of a cemetery. My husband built a pine box for Skylar that was so simply beautiful in the most heartbreaking way. With a natural cemetery, there’s no embalming, no velvet lining, and no unnecessary costs. We were able to dig the hole ourselves, carefully place her casket down into the ground, and fulfill our last duties as parents, shovel by shovel as we covered her up. It was the hardest thing I’ve ever had to do, but I wouldn’t want it any other way.

Being fully present in every moment was hard. I was tempted to get on anti-depressants to avoid some of it, but I saw what that did to other people in my life and decided early on I wanted no part of it. Drugs are like a pause button, but to experience life, you have to hit play again at some point and the pain is still there waiting on you. I decided to experience the full depth of pain in hopes of dealing with it sooner than later and to fully heal. The days that came after were dark. However, there is hope. As long as you are breathing, there is always hope.

Read part three here. I am excited to share with you how I walked through the darkest valley of my life and came out inspired, with a newfound purpose in life that led to something beautiful.

—
For more encouragement, mama, check out:

You’ll enjoy this podcast episode from This Grit and Grace Life: Hardship Hit This Singer’s Life and She Chose to Fight! with Cameron James Pt. 1 – 048

Ashley is mother to a daughter in heaven and wife to Kyle. She is a lover and a helper. She is known to brake for squirrels, stop on the side of the road to save a turtle from becoming roadkill, and can cuddle with puppies all day long. Coffee would make her mornings so much easier, but she just can't bring herself to like it. She's a friend of grief and an ambassador of joy. She feels honored to have this opportunity to share her story with you.

This Is How Mom Can Save the Day When Plans Change