How can we have teamwork in marriage when we’re so different?

Dan and I recently celebrated a wedding anniversary. Ours was a later-in-life marriage and now we can say that we’ve been married for years. 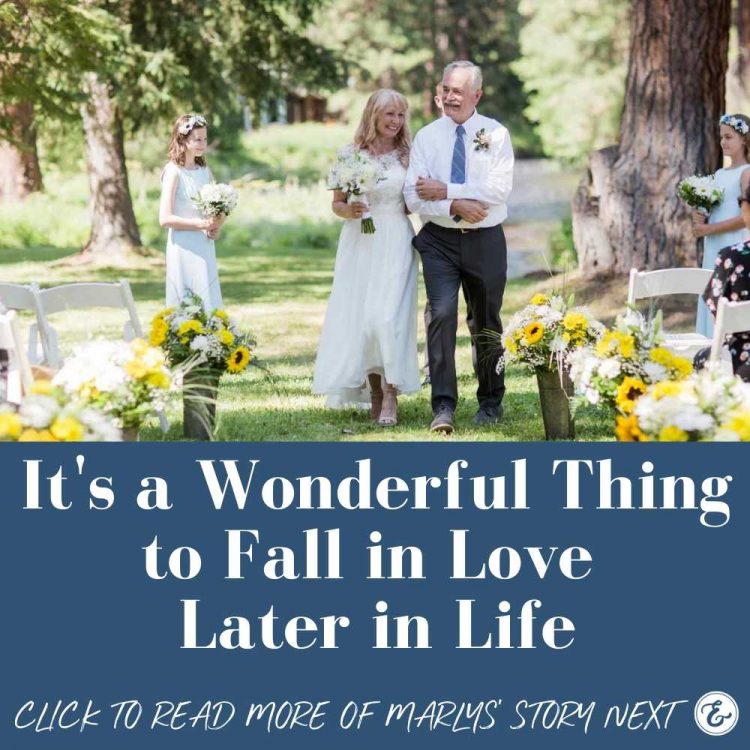 We reserved a cabin at the historic Weasku Inn, built in 1924 near the Rogue River in southern Oregon. It was a favorite fishing retreat for Clark Gable back in the day. A full, sit-down breakfast was dished up every morning at the lodge. Appetizers were served late afternoons; fresh-baked cookies at 7 pm; and around 8:30 each evening, hot chocolate and ingredients for s’mores were set out and a campfire was lit.

Dan and I reflected on our love story—how we met and grew to love each other along the Cascade Mountain trails, and how

grateful we are to be given a second chance at love after losing our first spouses to cancer. I’m learning Dan and always will be. We have much in common, but we’re also two very different people.

For example, Dan likes books and movies that are full of action. Action movies wear me out. I’m exhausted from all that chasing. I like classics, or movies based on true stories. Think Invictus, Apollo 13, or Miracle, about the American ice hockey team that beat the Soviets at the 1980 Olympics. It’s not that Dan doesn’t like those kinds of movies—but he’d prefer it if Blind Side, for example, included chase scenes, and leaping-across-impossible-chasms scenes, and going-over-waterfalls scenes.

Another way we’re unalike is when I get a brilliant idea, which is quite often. I’m ready to run with it and figure it out as we go. And sometimes with my full-speed-ahead approach I crash into a wall. Meanwhile, Dan has watched 17 YouTube videos, taken copious notes, and pondered deeply before he sets out. And when he reaches me at the wall, he knows how to get around it. Or over it.

I’m a de-clutterer by nature, and Dan likes to hold onto things. He owns two sets of cowboy boots—a dressy pair and a hard-working pair with spurs from when he rounded up cattle as a teenager.

Are You Both Heading In the Same Direction?

As different as we are, this is a man whose heart is headed in the same direction as mine. Together, we want our lives to matter for all eternity. We want to do as much good as possible while we still have time on this wildly spinning planet.

Every individual has been gifted with unique skills and interests and life experiences. Just as we each have a destiny and purpose that will tend to revolve around those passions and experiences, I think there’s also a destiny for two people working in tandem within a marriage to effectively impact the landscape.

Dan and I enjoy working side-by-side at Family Kitchen serving hot meals to the hungry, and side-by-side as volunteer kitchen staff at a woodsy camp in the Ochoco Mountains.

We enjoy practicing hospitality together. He knows his way around a Traeger grill while I tackle the salads and sides and desserts. And together, we encourage people to share their stories in our home or on our back deck.

Aiming for Teamwork In Marriage

Mother Teresa had a few thoughts about partnering within a marriage:

“Why did God make some of us men and others women? Because a woman’s love is one image of the love of God, and a man’s love is another image of God’s love. Both are created to love, but each in a different way. Woman and man complete each other, and together show forth God’s love more fully than either can do it alone.”

I can’t help but think that when two hearts are joined in a collaboration of love, determined to serve each other and serve in their corner of the world—that right there, that’s powerful stuff.

“Step into the mystery of marriage and the earth falls away to the strangeness of holy ground and a new, reorienting world.”

It’s indeed a mystery how two unique people can meld into one unit. It’s a mystery that we can be separate individuals with distinct likes and interests and desires and yet blend our passions to love our families and friends and neighbors and those walking a hard road.

What if we could recognize our spouse’s quirks as possible gifts that could complement our own? And what if we could collectively bless the lives of other people? What would that look like?

It would look brawny. Because love and collaboration is powerful.

—
Want to build your marriage on a sturdy foundation? You’ll love this podcast episode: How Do I Build a Healthy Marriage? – 178