Hope can seem foolish, naive, and blind. With all of the hurting in the world, what is there possibly to hope for? It can seem defiant, hoping even when things are dark and the world seems broken.

But hope, on a more personal level, can be very hard.

How do you hope when you receive the diagnosis no one wants to hear? Or when your marriage is in tatters and your heart is only holding on by a thread? Is hope possible when your child is in the depths of addiction and you expect the worst with every phone call? Is hope even alive when depression hits and the simple act of getting out of bed seems to be too much?

Hope, in our own personal lives is more complex, isn’t it? 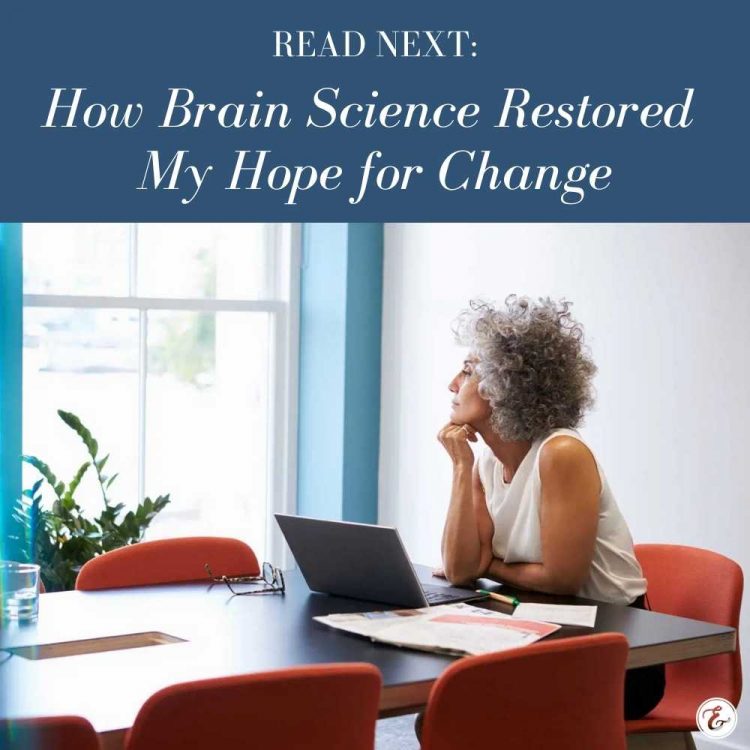 I Was Searching For Hope and a Plan

In my life, hope has been a journey. It ebbs and flows depending on the day, depending on the circumstance, depending on my mood. I hold tight to a mustard seed, always trying to keep one tiny shred of it clutched tightly in my hand, lest the world and its troubles swallow me whole. But hope is a journey for sure.

Three years ago I chose my first word of intention for the year: “PLAN.” It was 2017. I was in the midst of flux, not knowing where to turn or what to do with my life but knowing, by the pain of each day and my heart feeling out of sorts, that something had to change. I just wasn’t sure what. I was far from God at this time, not really sure that he could love me after all of my failings and positive that he couldn’t forgive me, so this word wasn’t, for me personally, grounded in Scripture. I chose it because I was lost. I was flailing around without hope, trying to find my way.

So choosing the word PLAN seemed to make a lot of sense.

And because I chose it in a Bible study setting I had to attach a verse to my intention, one that I would memorize, tattoo on my forehead and use as a guidepost all year long. At the time, I didn’t believe any of this, feeling as if I was fighting this battle alone with a weary faith and no hope, but I chose one anyway.

“‘For I know the plans I have for you,’ declares the Lord, ‘plans to prosper you and not to harm you, plans to give you hope and a future.'”

That a woman with no hope and no plan would choose a verse centered around both?

My Desperate Searching Led Me to God

If I had known then what I know now, though, it would have made a lot more sense. What I intended as a half-hearted easy choice (because let’s face it, most everyone knows this verse) became a lifeline, a beacon of light and, like a lot of things when God is involved, a purpose. Because in that year, all of my plans would change. My life, comfortable and predictable, turned itself upside down, most of it because I tipped the cup. What I thought I wanted (a promotion at my job, a life free from conflict at home, approval from a disapproving husband) changed, morphed and grew. And by the end of 2017 nothing in my life looked the same.

God’s plan, surely as He promised, turned out good.

Because what seemed like harm at the time, the distance between God and myself, my crooked path and poor decisions, was the exact thing that would put God right in my line of vision, right in my path. My plans, as I had laid them so carefully, were broken and shattered. God undoubtedly laughed at them.

And God laid His own plans down in the rubble of mine.

But God’s intent, all along, was for me to see Him.

His plans, it turns out, were good.

My Hope Is Now Secure Because God Is Always Good

After that year, that tumultuous year of change and upheaval, Jeremiah 29:11 hung around. It got promoted from yearly verse to life verse. I got pretty signs and hung them up on my wall. I even, briefly, considered tattooing it on my wrist.

Because what started as a silent stab in the dark for a verse to help me figure out the plan for my life became the verse to always, always, reminds me of my hope.

We can have hope, no matter the circumstance, no matter the current pain, when we cling to the fact that God is good. All the time. This is a non-negotiable, never-changing fact about our Father.

He is good, whether or not the circumstances of your life are good in the moment.

He does not change. He is good. Always.

And He uses even the darkest things, pain seemingly intent on destroying us, for good. Joseph, the Old Testament hero, was sold as a slave because his brothers were jealous of his wicked-cool coat. He was the favorite and they weren’t having it. So they sold him. As a slave.

Because you know what happens to Joseph? He uses a gift God gives him (interpreting dreams) to gain favor, gets really tight with the Pharaoh and eventually grows to great importance, overseeing all of Egypt.

What his brothers intended to harm him, those dark times of slavery and servitude, God used for good (Genesis 50:20).

But God’s intent, all along, was for me to see Him. His plans, it turns out, were good.

And then there’s David. Now his plans turned a little crazy, right? He goes from little shepherd David to big King David and gets a little too big for his britches, taking a sharp left turn from the guy who called on God day and night. His plans went from worship and obedience to adultery and then murder.

David lit his own match and burned part of his life down to ash.

But God, His plan uses even our own messes for good.

Because Jesus is in David’s bloodline. He is part of God’s greatest plan.

Hope is hope precisely because God is God.

God Can Make All Things Work For Good

Our evil, He uses for good. The pain that seems unbearable, He creates beauty from that.

Now I can’t profess that I felt hope when everything in my own life seemed dark and broken. Nor can I put myself inside of Joseph or David’s head. Maybe they were searching for hope as well. But what I can do, because we are blessed with the Bible, filled with stories of men and women just like Joseph and David, is read God’s Word. Absorb what it is He says He will do because He always does what He says He will do.

There is no mincing of words, God does what His Word tells us He is going to do. Jesus is the ultimate example.

And because we can trust that God is good and He will do what He said He’ll do, we can have hope that even in the darkest of times, He’s working. His plan is good, even when it doesn’t feel like it. We can have hope because God is hope.

When it all falls apart. When life seems too hard or too scary or too unbearable. These are the times when hope seems furthest away, when it seems like a four-letter word you don’t dare utter or speak aloud. Even though it seems impossible in these moments, this is when hope is the most important, the most daring, yes, even the most defiant of acts.

Have hope, my friends. Dig into that grit and grace. Remember that God is always working, even when it’s hard. His love never fails. He is rest for the weary. And the battle has already been won.

—
To hear Meaghan share more of her story, check out this podcast episode from This Grit and Grace Life: Answering the Question “Who Am I?” With Meaghan Dawson – 116!