As a little girl, I didn’t grow up dreaming about the day I’d write a book about women, sexuality, and sexual sin. (Who does?) As a kid, I didn’t want to talk to my own mom about puberty, much less talk to anyone else about sexuality and God’s design for our bodies! But God set me on a trajectory I never anticipated when, as a seminary student, He led me to disciple a group of college freshman.

Christians Need to Talk About Sex

As I began looking for faith-based resources on women and sexuality, I identified a void in the market, awakening a realization that we as Christians are leaving younger generations to be sexually discipled by the world. If we aren’t talking about God’s design for sexuality, we’re abdicating our role, relegating our generation and the following ones to be influenced by the world rather than the Word. Our silence about sin is a form of complicity in it.

Why Are We Silent About Sexuality?

Trauma
One young woman who’s experienced over a decade of sexual sin often laments how her mother never talked to her about sex, except to tell her not to have it until she’s married. As we discussed various dynamics in her family, I discovered that the abuse her mother experienced shaped her view of sex, and she parented out of her pain, leaving her daughter to think of sex as dirty, dutiful, and unpleasant.

Sexual abuse affects every area of a person’s life, and trauma that is not addressed affects not only the victim, but those in relationship with the victim. For abuse survivors who become parents and grandparents, their experiences affect how they parent and what conversations they have or don’t have about sex.

Guilt About Our Own Sin
If someone is in the midst of a pornography addiction, they’re not as likely to teach others that pornography goes against God’s design. Whether it’s something we’re currently struggling with or something from our past, we can feel inadequate or embarrassed to speak about our struggles and failures. Or we’re unwilling to give up a sinful behavior, so we don’t acknowledge it as sin or talk about it with others. We avoid because we don’t want to deal with our present and/or our past.

Ignorance and Immaturity
I’m currently studying 1 Corinthians, and in this letter, the Apostle Paul provides instruction to the Corinthian believers on what following Christ does (and doesn’t) look like. In 1 Corinthians 5:11, he lists several vices: sexual immorality, drunkenness, reviling, greediness, and idolatry. It makes me think about the warning labels on products. For example, the warning label on an iron cautions people against ironing their clothes while wearing them, and such a warning label exists because there’s someone somewhere who’s done that and gotten burned.

If you read the entirety of Paul’s letter to the Corinthians, you realize he names these specific vices because they were the very things some of the Corinthian believers were doing. Many of the Corinthians came out of paganism and needed to be taught that such things go against God, and it can take time to learn what you don’t know and to stop what has been a pattern of behavior in your life. If someone has never learned about God’s design or why His design is good, they’re unable to teach others what they themselves do not know.

This list isn’t exhaustive, but they’re some of the reasons I’ve encountered for why we as Christians aren’t talking about sexual ethics and God’s design in the church.

How Can Christians Join the Conversation About Sex?

Whatever our sin struggles are (sexual or not), let’s deal with our sin. Avoiding it, numbing out, engaging in escaping behaviors—they don’t help. The sin is still there, and we need the Holy Spirit working in us to change us from the inside out. Confess your sin to the Lord and to safe, mature believers and begin taking steps to turn away from sin and follow Christ.

2. Find Help For the Pain of Your Past. Yield to the authority of Scripture and the God who authored it. It can be painful to obey God. Doing so often means I go against what, in the moment, my flesh and my heart wants. I’m currently dealing with a situation where a young woman proclaims to be a Christ-follower but is pursuing a lesbian relationship. She’s choosing to follow her heart’s desires rather than God’s commands. Do we know God’s Word, and are we willing to wholeheartedly obey Him, whatever the cost?

Know what God’s Word says about sexuality, God’s design, marriage, relationships, what it means to be a Christian, etc. Sure, read books, listen to sermons, and learn from podcasts and articles. They can be helpful, but whatever we read or hear, let’s weigh it against Scripture. Let’s know God’s Word for ourselves over and above what other people tell us it says.

5. Learn to Be a Good Listener.

I recently had a conversation with a young woman who expressed fear over sharing her struggles with her parents because they’ve historically blown up and shamed her rather than listen to her.

Do people see you as trustworthy? Do they see you as safe? Do you patiently listen to all they have to say (whether or not you agree or affirm what they’re saying)? Or do you interrupt them, jump into fixing them, or condemn them? Are you distracted during the conversation, not giving the person your undivided attention? One of the greatest ways we can show love to one another is by hearing a person out and trying to understand their point of view.

6. Be Willing to Have Awkward or Hard Conversations.

I can’t tell you the nerves, tears, and internal trembling I’ve had going into conversations where I knew I needed to lovingly confront a person about sin. But how unloving is it to be apathetic in my relationships with the people God has placed in my life? Relationship is key here. I don’t have these conversations with strangers or acquaintances. The people I do this with are ones where the person knows I love them and want their very best. They know I’m going to be present to help them, if they need it.

The bottom line is that Christians need to talk about sex. Whether you’re a parent, older sibling, aunt, small group leader, mentor, or ministry leader, consider what you want your family member, mentee, or parishioner to know about sexuality and God’s design. As a parent strategically considers what their child needs to know and be equipped to do when they launch from their home after high school, we as spiritual parents should intentionally identify what our people need to know and be equipped to do in order to faithfully follow Jesus in every area of their life.

—
If you would like to hear more from Ashley Chesnut, click here to purchase her book: “It’s Not Just You” 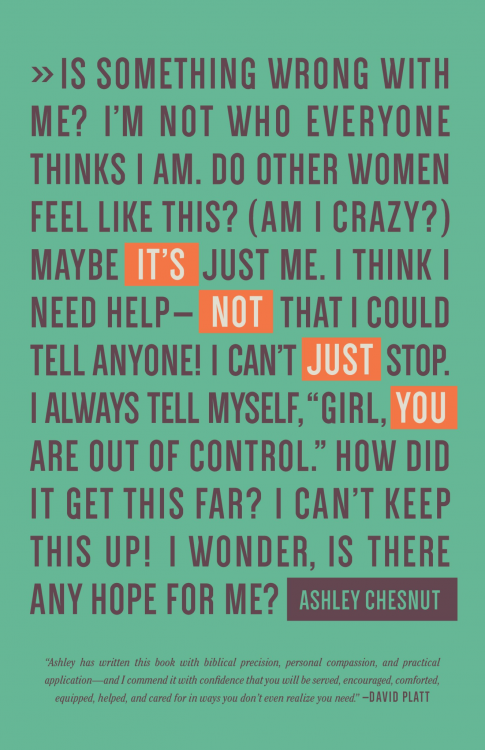 Sex can sometimes come with a painful past. If you’ve been harboring hurt as a result of sexual abuse, we hope this podcast episode helps you find hope and healing: Find Healing and Freedom From Sexual Abuse With Jill Monaco – 157

Ashley Chesnut serves as the Associate Young Adult Minister at The Church at Brook Hills in Birmingham, Alabama, and she’s the author of "It's Not Just You: Freeing Women to Talk about Sexual Sin and Fight It Well." She has a Master of Divinity from Beeson Divinity School and a Certificate of Biblical Counseling from Southeastern Baptist Theological Seminary. When she's not at the church or meeting with girls, you can probably find her at the farmer's market or trying some new local restaurant.