Home / HerStory  / The Field—My Path From Innocence To Abuse

The Field—My Path From Innocence To Abuse 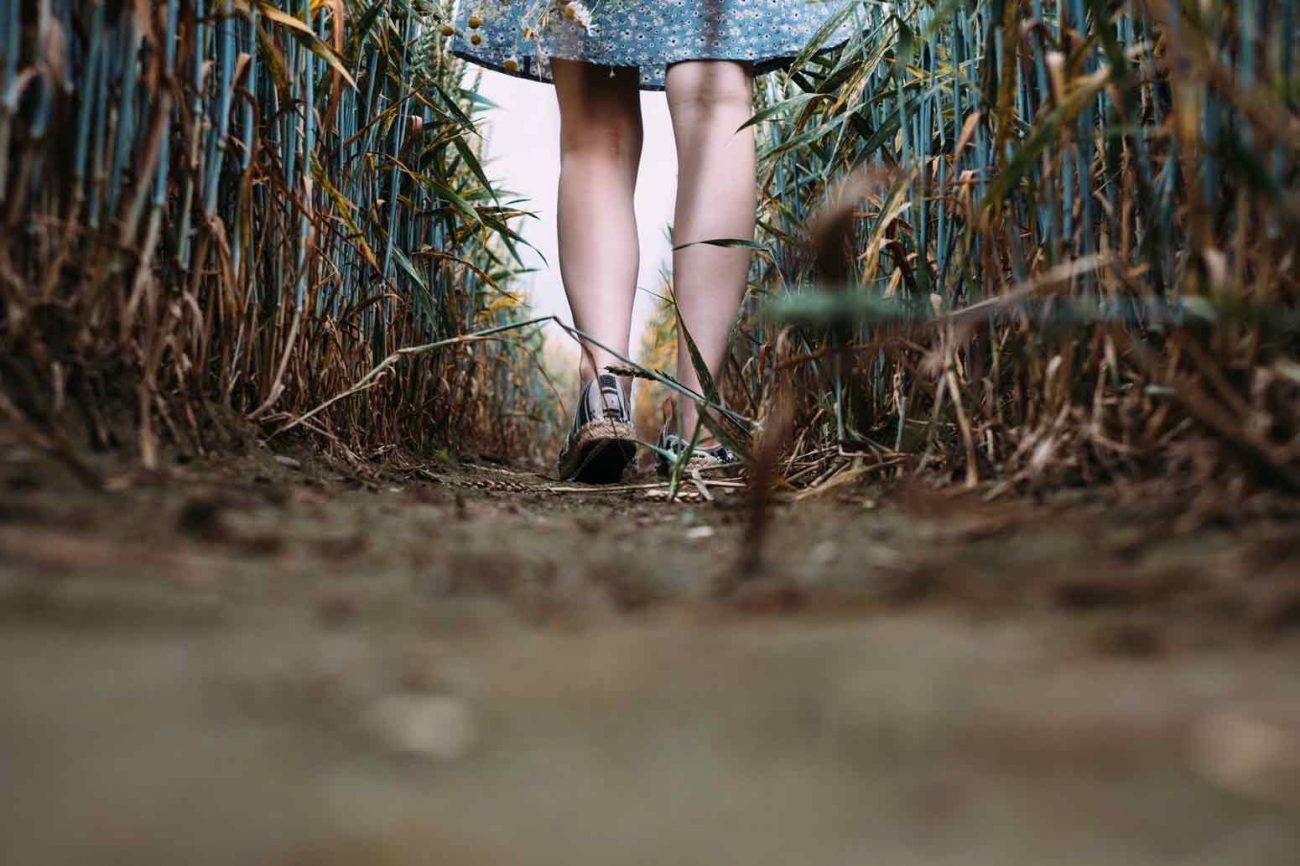 The field was a place of childhood imagination, a land filled with underground forts, wood crate castles, and a path that wandered over dirt mounds and through a labyrinth of tall grasses and wildflowers.

Fruit trees were scattered throughout the property, apples and plums. The lot was blocked from the street by shrubs that seemed to stretch from the ground to powerlines. It was a meeting place for the kids in the neighborhood, a place where you could dream, getting lost in the fairy-tale minutes of youth.

But for me, this magical playground held my secrets. It was the path I took to get to the Petersons.

The Petersons were an elderly couple. They owned a large house on the edge of the field. He was short and round, she was bedridden, and they were the object of my mother’s compassion.

The field was the place I met my friends. We would play until the sun began to fade, returning the next day to do it all over again.

But this same playground shifted when I had to take the journey from my house to the Petersons. I slowed my steps, kept measuring the distance I traveled by glancing back towards home until my toes reached the boundary line—a ditch that ran the length of their property.

I would run down the bank of the shallow gulley, coming up on the opposite side, through the wire gate and around the back of the house. Until, I stood on the front porch with my heart pounding in my chest. I was convinced others could hear each beat. I would stand at that door for several minutes, waiting for the courage to knock.

My trips were made to deliver fresh baked cookies, vegetables picked from the garden, or sometimes a shopping bag filled with dinner for two. Other times, I was sent to stay with Hannah and Bob because my mother had to run errands. Regardless of the reason, I dreaded the visits.

The walk to their home was filled with anxiety and fear and the run home heavy with guilt and shame.

He was old enough to be a grandpa.

I should have been safe but uncontrolled brokenness and obsession causes so much pain.

I had a hard time putting words around my feelings. I couldn’t tell my parents that Bob would trap me in a room, standing in the doorway, not allowing me to pass. I couldn’t share that the toll for getting out of the room was paid with a price—a price too costly for a child to pay.

So, I continued to make the trips. Each time returning through the field, spilling my secrets onto the ground through a cascade of tears. My mother’s kindness for the Petersons was overflowing, drowning me under a wave of hopelessness.

When I was seven we moved, leaving the field, the Petersons, and my secrets behind. It would be over a decade before I shared what happened during those visits. Bob and Hannah had both passed by then, their home leveled, and new homes gracing the field.

I often wonder how many children are trapped in rooms, paying an unthinkable price for their freedom. How many carry the shame and guilt forced on them by those who betray their innocence, deceive their trust, those that violate both mind and body?

I remember the field, the sanctuary between safety and assault. The sacred place where I left behind the pain brought on by a sin-filled world. The bridge that each time brought me home.

I don’t share this story to elicit pity. Nor do I tell it to cast judgment on an obviously ill man. I share my story to encourage you.

At the age of five, I faced evil. Hidden behind a grandfatherly figure who should have been safe. I wrestled with the frustration of not understanding what was happening in my world but deep inside knowing it was wrong. And somehow, “it” being wrong turned into “me” being wrong, and that haunts a childish mind.

Left unresolved, those “being wrong” feelings turn into “not enough” feelings, and as a grown woman they drove me to work harder, be better, do more, and more, and… Funny how the insults of youth dictate adult behavior.

For many years, I continued to retreat to the field. A place in my mind and heart that was a reprieve from the times when my doing wasn’t enough. But, I began to recognize that if I kept running to this safe place, then Bob still held me hostage—this time in a room of my design.

Search for a Door

So, what do you do when you are trapped? You look for a way out. You search for a door!

For me, the door to freedom was sharing my story, one trusted person at a time. And once I could breathe and share the story without fear, I was ready to begin to pray. Pray for healing—restoration from my past. Pray for all of the others being held in bondage by their childhood encounters. Pray for those that would violate innocence.

Slowly, through prayer, came the ability to let go. Let go of the power Bob’s sickness had over my life. Let go of the need to try to make up for my perceived five-year-old failures—I couldn’t stand up to the monster that lived on the edge of the field. Let go of my need to retreat time and time again to the field.

God faithfully showed me that bad things happen in this life. They shouldn’t be minimized or tucked away and ignored. Rather, He asks that I trust Him and courageously face the monsters of my youth and the burdens of today. He asks that I learn from each situation and use what I learn to support others along the path. And, in doing so, I become stronger, more compassionate, and more trusting in God’s ability to use pain to transform me into His image.

Today, I’ve found a new sanctuary—resting at the top of a hill, overlooking a city, crowned by a cross. And when I am faced with the ugliness of this world or the sin in my life, I can look up and be certain that from now through eternity, I am home resting in the security of my Father.

God rewrote the text of my life when I opened the book of my heart to his eyes (Psalms 18:24, The Message).

Below are resources for children and adults who have suffered from sexual abuse or are currently facing sexual abuse:

Learn more about protecting your children in this video:

Surviving Domestic Abuse—When There Were No “Red Flags”
This Is What I Learned About Life After My Rape and Pregnancy
Post-traumatic Growth: Finding Meaning in the Pain
What You Need to Protect Your Child From Sexual Exploitation
My Faith Was Rocked by My Son’s Suicide
Do You Want to Be an Overcomer? The Way Out is Through

You Are 15 Minutes Away from a Better Day
To the Moms in the Middle Years
For the Woman Who Wants to Be Strong
Being a Stepmom Is Hard! 5 Ways to Do It With Grit and Grace
Ask Dr. Zoe – How to Avoid Gossip Among Friends
10 Truths I Found to Lose 75 Pounds
#gritandgracelife

You’ll love this podcast episode from This Grit and Grace Life: Sex Trafficking: Why Kids are at Risk and What You Can Do to Protect Them with Christy Ivie – 121